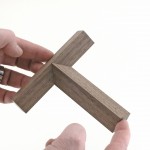 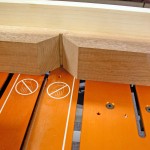 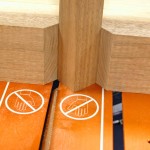 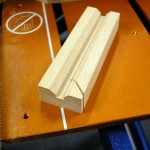 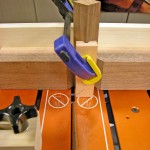 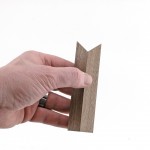 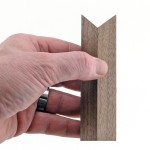 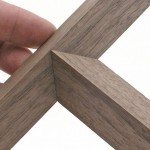 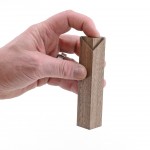 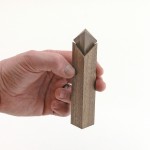 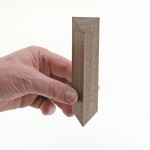 “The people dancing are considered crazy by those who can’t hear the music.”
–George Carlin
Things are never as they seem. For example…
I am working on a table design and today I needed to test the strength of a new joint. (One of my design criteria is to use appropriate materials in a scale fit for the task which often requires empirical data). This joint is not really new, but it is to me. 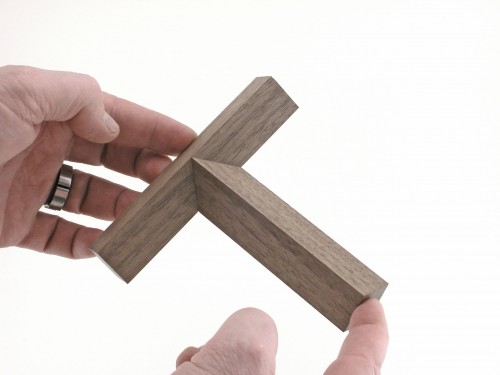 This joint is beautiful and really creates strong shadow lines. Using the showroom Jointmaker Pro (mine has not arrived yet–I am always last) I made the two 45 degree cuts just goofing around (didn’t take the time to dial in my angles) and they came out damn close to perfect (not gallery quality but REAL CLOSE). 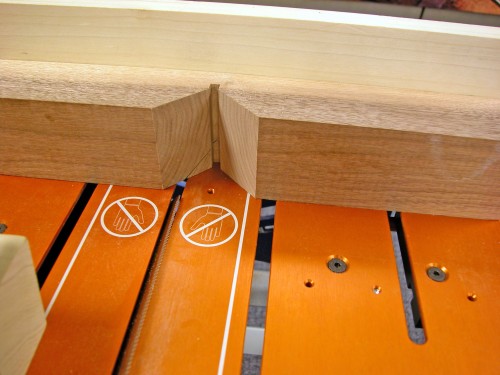 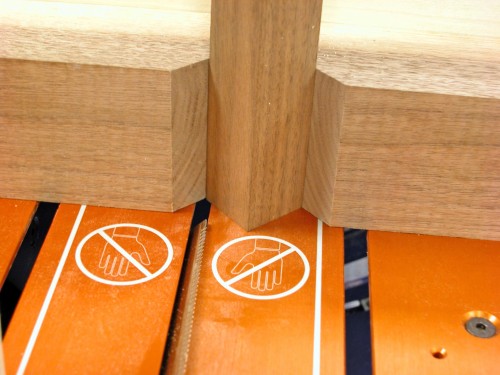 The stock is trapped vertically and now a clamp pad is needed. 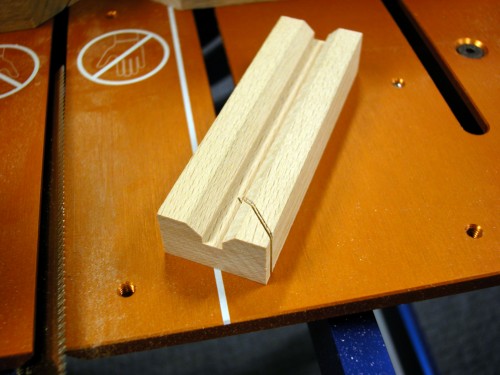 Using the HP6v2, the V groove was cut and then using one of the groove soles, I made the corner relief cut.
.
.
. 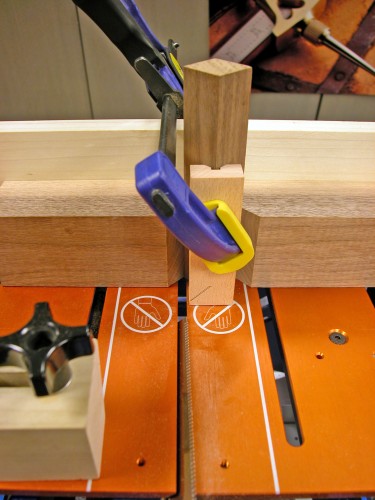 Here’s the stock clamped in place. The cuts were made in three passes, but I think they can be done with single passes in production–don’t know yet and I would never sacrifice accuracy or quality of cut for speed. 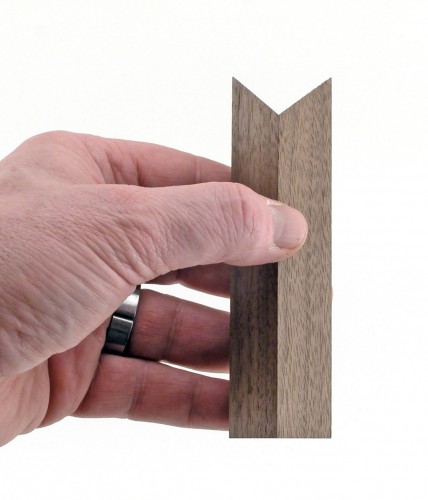 The quality of this cut is just incredible. 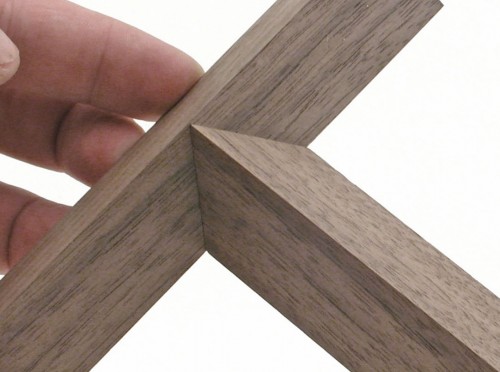 Now there is something I am leaving out here regarding strength–later. The bad news is that my table idea suffered a serious setback after I picked up the falloff from this cut… 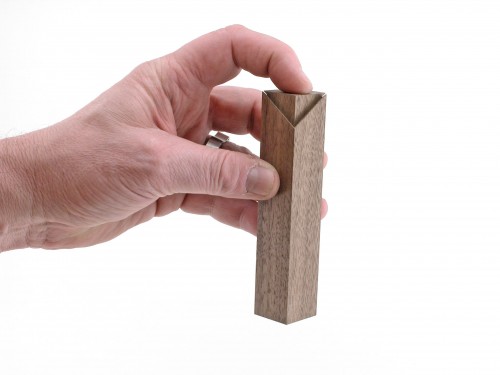 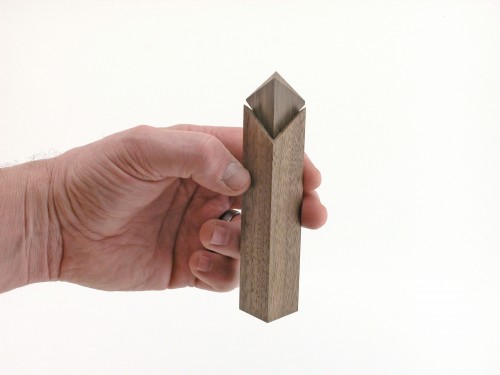 …even more interesting was the different ways I could put the two parts back together–notice the reflections on the endgrain when offset–straight from the JMP..
.
.
. 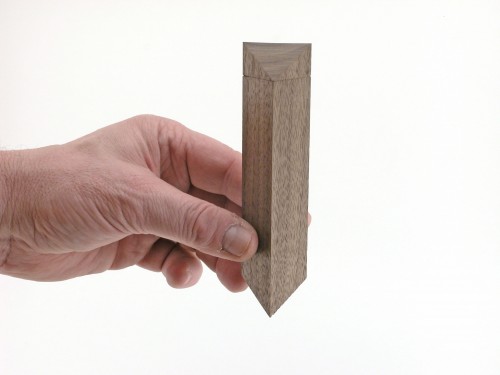 My table idea is out the window for the moment because I just discovered the inspiration for a chess set.
–John 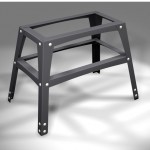 I am pleased to share that we are now accepting web and phone orders for the Jointmaker Pro! Here is a pic of the new stand for those that want a stand-alone machine. It is laser cut and will fit the production model perfectly–the legs are height adjustable so the sliding tables can be precisely set to hip height.
Two noteworthy tidbits; we plan on shipping in late fall and our special introductory rates will only last a couple of more weeks. (Late fall means before the holidays using the Economaki calendar.) 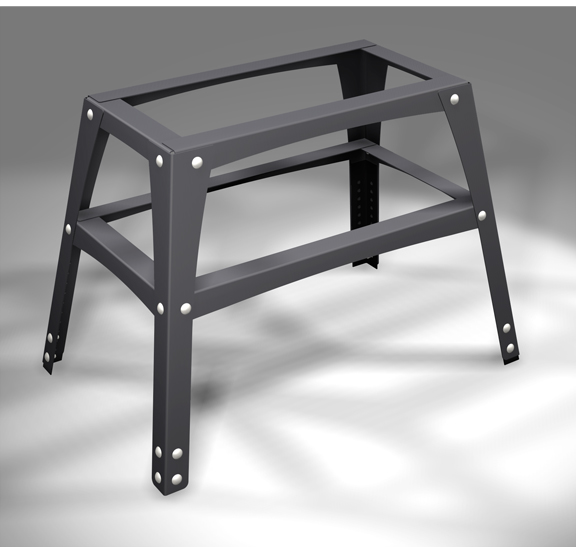 The next stop for the Jointmaker Pro is the International Woodworking Fair August 20-23 in Atlanta. I will be demonstrating in the booth of the firm we contracted to make the Jointmaker Pro components–booth number 8874. Please stop by and introduce yourself–this should be a fun show.
The following week the Jointmaker Pro debuts in Toyko. I will be demonstrating in the booth of the company that makes the Jointmaker Pro blades–I am looking forward to the trip and some good sushi. I am a bit troubled about leaving because I have a 14 year old dog that…well, you dog people know where this is headed. I love my dogs and I sure hope my trip is trouble free in this department.
If you followed all the buzz regarding the Jointmaker Pro on the internet a few months back you undoubtedly came across the bile of many who had a great laugh at our expense regarding this new tool. Here is a refreshing update;
I have been contacted on two separate occasions by web forum participants who were actively leading the chorus of boo’s regarding the Jointmaker Pro…and get this–they both apologized!
This occurred after seeing the Jointmaker Pro in action during one of my demonstrations. Both agreed that their behavior was sophomoric and/or irresponsible. Now get this–both of these folks placed orders for the Jointmaker Pro! I know this is a little thing but sometimes the smallest gestures have the largest significance. One thought my blog rants about the “Woodworking Taliban” was funny but also dead-on and he wanted out. I thought to myself, this is just like raising kids, you have no clue they are listening until years later. Anyway, their sincerity was moving.
I spent a great deal of time in July trying to reduce the cost of the Jointmaker Pro and was successful by almost $50. Guess what happened? During that same time the price of the metal increased $45. Go figure.  For those of you who may be in the world of manufacturing, I have NEVER seen such a market. Between daily price fluctuations and all out shortages, it is very troublesome.
I won’t be posting again until the first week of September and my first post will be a Sneak Preview of Commemorative Tool #15. It is a never-before-seen device that …
–John

Well, it’s a little after midnight and AGAIN I find it hard to go to sleep. I just spent almost 12 hours on the Popular Woodworking campus talking about the Jointmaker Pro. Although this trip was all about business, I would not dare call it work, only because there was free food, and plenty of dead cicadas… DETOUR: We don’t have cicadas in Oregon (if we do I am sure someone will correct me) and this much dead biomass is fascinating. And loud. Before they die that is. Do the math here–17 years as a hibernating nymph buried next to a big, fat tree root, wake up hungrier than a teenager without a refrigerator, munch on tree sap until the libido overwhelms, spend a couple of hours at the screaming mimi cicada bunny ranch and then croak from exhaustion… This isn’t so bad when you think about it…no SAT tests, background checks, or exit polls–just an incredible, one week, no-strings-attached love fest. Reincarnation requests anyone? How about a Jamba Juice Tree Sap Smoothie?
I digress. Approximately 60 people ventured into Cincinnati to eat free pizza and listen to my Silent Woodworking spiel. (Not quite as bad as one of those guilt ridden timeshare meetings…I hope.)
It is hard to tell if people had a good time, but I found it fun. As many of you know, Chris Schwarz claimed that the cut from the Jointmaker Pro was the cleanest saw cut he has ever seen–by any method. Of course the Woodworking Taliban pilloried him for such nonsense and I believe, if any of the attendees step forward, his critics will join the cicadas in the belly of a street sweeper.
After my presentation, the Jointmaker Pro was moved to the shop and all interested were allowed to make cuts. There were plenty of smiles–and frankly that was worth the trip. I am leaving the prototype with the Popular Woodworking crew for the next month for further play and testing. Oh, and a small detail — nobody lost any digits.
I was treated like a dignitary (I am not, and NEVER want to be) so I had four pieces of pizza, two of which were onion–without which we would still be talking about the Woodworking Taliban at a local watering hole. Smart people, those Popular Woodworking folks.
–John

Some of what you are about to read is true.
For the past 25 years I have had numerous encounters with Bridge City Tool antagonists. My therapist says that by talking about it, I will begin the healing process.
But I don’t have a therapist, I just made that second sentence up–it is fake and a lame attempt for sympathy. I created a mental image of a therapist in my mind and while walking to my favorite Bento lunch spot we had a compelling and somewhat heated discussion which led to the creation of this blog entry–I had no choice.
OK, that is not true either. I did see an episode or two of the Soprano’s … all I know is I now feel great.
And I hope you will feel better too.
wood·work·ing /ˈwʊdˌwɜr

d-wur-king] Tal·i·ban [tal-uh-ban]
-noun
1. A small, loosely organized, and wildly dispersed group of individuals (including homo erectus and descendants of the Huns) who (by virtue of a personality flaw) collectively preach, primarily via internet forums, a singular and myopic vision of woodworking exactly as it occurred between the years of 1659 BC to 84AD, which of course is the end of Ancient Times. (Modern Times begin with the death of the first horse [her name was Apricot] which correspondingly began a 1500 year reign of hide glue.)
2. Individuals with basic woodworking skills and internet access who make, wear, and swear by banana leaf shoes.
3. Any woodworker who supports the “free wood” movement by removing every other ceiling joist from one’s home (or hut) and uses the material for a hemp trellis or cooking fuel.
4. Those who vehemently debate the merits of flint over carbon steel–more than once.

Another Real Life, I-Swear-This-is-True, Encounter with the Woodworking Taliban
Most of my encounters with the WT (you guessed it!) are passed on by irate customers after their real life, I-swear-this-is-true, encounter with the WT on internet forums. What I am about to share occurred three weeks ago to John Economaki (that would be me) IN PERSON! The story begins…
I was in a very large Midwest city… I can’t remember the name but I am positive it rhymes with Chicago. Actually, it could have been Chicago but I am not a good rhymer (should I run for office?). We were in the shop of Jeff Miller (this was a TLN Hand Tool Event and Jeff is a very talented designer/craftsman who also teaches). I was excited to be there, my favorite road compatriots were there (in no particular order); Tom Lie-Nielsen, Chris Schwarz, Denib (the official Lie-Nielsen PRO ATHLETE that flattens hard-rock maple workbench tops with a hand plane FOR FUN…do the math on that one) for two straight days of high-level tool talk. DETOUR: I had so much fun at dinner I put on a Lie-Nielsen tattoo that Denib swore would rub off in the shower. It did, and what was left of my arm looked like the lead-in clip to the Six Million Dollar Man, only instead of gears, lights and pulleys beneath my skin, there was real bone, for which I am thankful.
The real purpose of my trip was to introduce a new sawing machine that uses no batteries or electricity. One demonstration involves cutting hardwood dovetails with one pass of the saw in 5/8″ thick material. ( I have been working wood since 1968 and I have never seen anything like this–it is a very impressive demo.) And it is fast. And perfect, as in P-E-R-F-E-C-T. That is not me talking, others will agree. Except…
“That’s cheating!” the man screamed over the small crowd.
“How is this cheating?” I asked.
“That’s cheating!” he replied, and “It is not FAIR!”
Immediately recognizing him as a likely CHARTER MEMBER of the WT, I asked him to clarify his position. (My favorite weapon against the WT is a logic question–very similar to exposing a vampire to sunshine.)
“Those are NOT HAND CUT DOVETAILS!” Of course he was getting louder.
Pretending to be concerned that I violated an unknown sacred rule, I grabbed our Kataba handsaw from the workbench to my right, offered it to him and asked him to share how he cuts dovetails.
“I can’t cut dovetails with that saw–it has no back on it,” he confidently stated.
“Back? You need a BACKSAW to cut dovetails?
“Yes, I use a backsaw.”
“That is cheating!” I loudly proclaimed.

There were smiles around the room as he stomped off, and yes I was a jerk, but it is O.K. to be a jerk when one encounters the WT!
The WT have a set of unwritten RULES that only they understand. Never to be concerned with anything but THEIR technique, their always-unsolicited-opinions are NEVER to be questioned. I dare you to mention proportion, harmony, texture, grace or anything that has to do with the appearance of SOMETHING.
And there is something about perfect work (insert full moon analogy here) that really sets them off.
But I exaggerate.