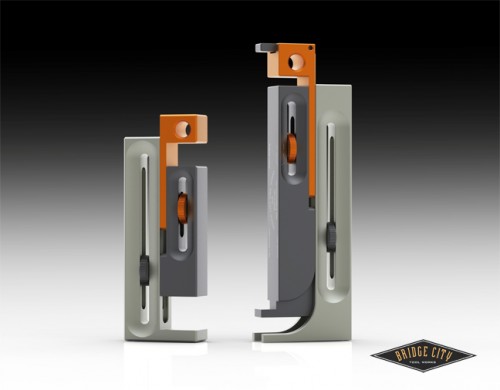 03/26/15 – All parts have been machined and are currently at the anodizer. Unfortunately, the anodizers are about 2 weeks behind schedule, which will push delivery back until about the end of April. We will stay on top of them to get them done ASAP. Don’t they understand that people have kerfs and tenons to make?

04/02/15 – We are still waiting on the anodizers, who had to redo some parts due to colorization issues. Even with this extra set-back, they are catching up and have begun sending parts to the laser engravers.

04/23/15 – It took a couple of tries, but the anodizers figured out their colorization issues and just finished the last parts today. Final assembly will be finished by Monday, and they will begin shipping out the following Monday.05/07/15 – KM-1s and TM-1s have arrived, and pre-orders are currently being fulfilled.

05/14/15 – 99% of all orders have been shipped. The only orders that haven’t been fulfilled are those whose billing info is not up to date. If you are expecting a KM-1 and/or TM-1 and your billing info is correct, then they are on their way!  The remaining KM-1s and TM-1s are currently listed as In Stock on the website and will be sold on a first-come, first-served basis.

02/07/13 – Kerfmakers and Tenonmakers will be back in stock in the end of March.

02/28/13 – Broken cnc machines mean mid-April. Also, there are quite a few shops in the area working overtime make gun and scope parts…it seems there is a big demand for those things and measly Kerfmakers get pushed to the side!

04/11/13 – All is looking good. The parts are at the laser engraver. Final assembly should be next week. I expect the Kerfmakers and Tenonmakers to be in inventory by the 23rd.

04/25/13 – Yikes, there is a serious lack of communication that can happen sometimes. The KM-1 were set to be delivered this week, but the anodizing color of the bodies was incorrect. The Champagne color we use is a tough one sometimes. So, they are being re-anodized right now. I found out this week that the TM-1 will follow suit right after the KM-1. Ugh. This was not my plan.

05/9/13 – Kerfmakers are in stock and live on the product page. Tenonmakers should be in stock on our site by Tuesday.

05/16/13 – Kerfmakers and Tenonomakers in stock with a pretty good supply. Order up!

11/29/12 – Kerfmakers were dropped off at the office moments ago. They head to the distribution center and will ship next week. On time as always! Ahem…

5/10/12 – Kerfmakers and Tenonmakers are back in production. We should have them in stock by 5/17/12 –  Whoops! That above delivery date is incorrect! I must have been looking at the wrong month or something. July 20th is the date.

5/31/12 – BTW, this has been our best selling tool of the past 5 years. Simple and works perfectly! Anyone interested in limited edition colors? or maybe a Stainless Steel Version?

7/12/12 – I got confirmation this week that we are on track for shipment of these for next week.

7/19/12 – Wow, what a difference a week makes. I spoke with the machine shop yesterday. Turns out they are had issues with the tumbling media. They are getting anodizing samples done to ensure a good finish. So, this sets us back. Looks like they won’t be able to finish off and deliver until August now. I am guessing the week of the 6th.

8/9/12 – Set backs. Looks like a multitude of issues are occurring with the final process. Some are unrelated to machining but more related to motorcycle accidents and hospitalization. I’ll have more info next week, but needless to say, things are in limbo and I am hustling to find the best solution to get these in your hands.

8/16/12 – So the Tenonmakers will be at the office on Monday. We’ll send some over to the distribution center then. The web page should be live by the end of next week. The Kerfmakers will follow suit the next week. Yikes, sorry about the drawn out timeline on this one. I think I will just go ahead and start production on the next batch as soon as we get this one!

8/30/12 – Well, those went fast! Kerfmakers are in and are just about sold out too. We will be making more starting in 2 weeks. This batch will go fast too. Tenonmakers are in and should be available to order very shortly. Meaning tomorrow.

9/6/12 – The Kerfmakers cam and went. The Tenonmakers are in stock and ready to ship. More Kerfmakers will start back up in a week or so. They are wrapping up parts on the JMP Fence, and then will start with a new batch of Kerfmakers. This will be a faster turn around time too.

Another batch of Kerfmakers has been started. We should have them in stock by September 6th.
Parts are in the final stages of machine work. We are planning on getting parts to the anodizer on August 17th.
The anodizer did a color test, which killed a few days. The production should start on Monday.
Anodizing complete. Meeting tomorrow to give final approval before laser and assembly starts.
Laser Time! The Kerfmakers get a laser etch of the logo. It is a very small detailed graphic. The laser is up to the task where silk screening or other applied methods would not have the clear detail. They won’t be ready to ship on the 6th as stated above. Final assembly should start by the end of next week and put into inventory by the 14th. Hopefully!

9.8.11 – The assembly has started. “Loctiting” the set screws in is a detailed little task. Locktite (especially the Red stuff) is pretty heavy duty. It is actually sugar based. To remove an bolt with red Loctite you need to use a torch to heat it up and melt the glue a bit.

9.15.11 – Sorry I did not update the ship date last week! Final assembly and packaging is underway. I hope that we have them in hand by the end of the next week (the 22nd) That would mean we can start to process the orders and shipping starts on the 26th.

9.22.11 – Assembly and packaging is still going on now. We are planning on bringing a bunch to the WIA next week. The remaining should be at the distribution center. The web page should be live for orders at the end of the week too.

9.29.11 – I did not get any in time to have with me here at the WIA show. They should be dropped off at our distribution center tomorrow, the 30th. We will turn the web page live on Monday, October 3rd.

10.3.11 – Almost there! Obviously, the page is not live yet, since they are still being assembled! Apparently, these things do take some time. Some will be dropped off at the distribution center either this afternoon or tomorrow. We are pushing them to get everything inventoried asap and THEN the page can be turned live. Hang in there! Thanks for your patience!

10.6.11 – The distribution center has them in hand now. We were told that all should be inventoried tomorrow so the web page will go live then.