Nothing quiets prejudice, hatred and biases more efficiently than travel. Only until one sees, smells, hears and learns from different cultures and their people can you intelligently grow as a citizen of planet Earth. Over the past 4 years, my 8-9 trips to China have been filled with wonderment, awe, disgust, dismay and joy. I thought this field trip idea would be an equally fun learning experience for Bridge City customers. And it was.

We all had a great time in Shanghai so it was time to see Nanjing! To get there, we took the bullet train.

The Chinese government is fully committed to connecting all corners of China with bullet train service. These sleek, all electric vehicles with bodies of extruded aluminum, shuttle passengers at an amazing 300 km/hr. (That is a Nascar speed of approx. 186 miles per hour!) The ride is incredibly smooth so of course I had to ask how that was possible.

In order to go that fast, and that smooth, the tracks need to be smooth. How smooth you ask? They are actually surface ground once in place and the tolerance is 1mm every 16 meters. How accurate is that you pesky knowledge seeker? 0.00075 inches per foot! That is crazy. How crazy? That is flatter than our precision straight edge!

I then inquired about heat and cold and expansion joints. I was told the rails are not welded but joined with a special alloy that keeps them “on track” during extreme temperature swings. There is no clickety clack, clickety clack, unlike my experiences on Amtrak here in the States. I would say that on average, the bullet train is smoother than air travel. That’s is simply amazing to me. It is also relatively inexpensive.

The train stations are nothing short of enormous. With the exception of the Boeing assembly building in Everett, WA (do put that on your bucket list of places to see), these train stations are the largest buildings I have ever been in. They are sleek, modern, and so damn big they disguise the fact that at any given moment, there are thousands of people waiting to catch a train. Here’s a pic of the Nanjing station; 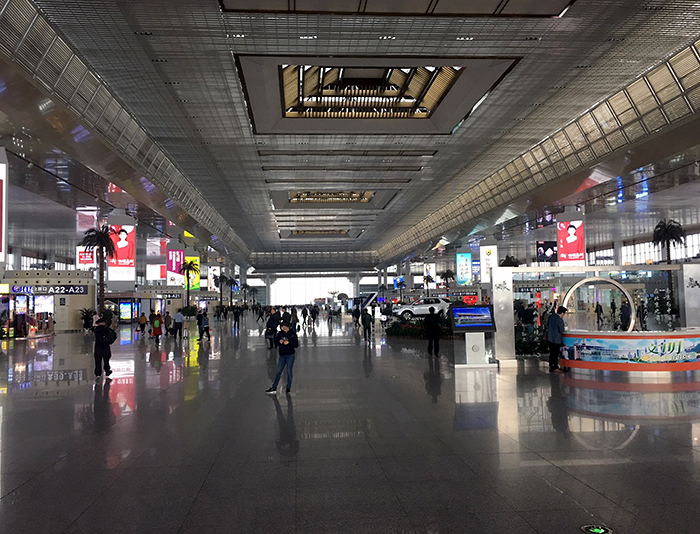 This pic was taken in the middle of the station, and those windows down yonder are at least three football fields away. It is the same going the other direction. The place is huge, shiney, new and unbelievably impressive. AND, this is just the UPSTAIRS! You take an escalator down to the train terminal to an equally large space to catch one of the many trains, which like German trains, operate to the minute. I was also told that this year, for the first time, bullet train travel was profitable.

Here’s a little video of a train coming into the station;

Once in Nanjing we had a guided tour of the Harvey Industries facility, and were able to see the new Gyro Air Dust Collector in production as well as the Bridge City Tool Works assembly area. We had a fascinating time culminating that evening with a BCTW hosted dinner, our last dinner together.

The next day was the highlight of the trip…