In a couple of weeks I will head over to Nanjing to supervise the initial production run of several new tools, including the new HP-9 Dual Angle Block Plane. If all goes well, it, and the others, will be shipped later this year. I have seen the early prototypes and I am excited for this plane to be available for the first time outside of North America… and North America too! 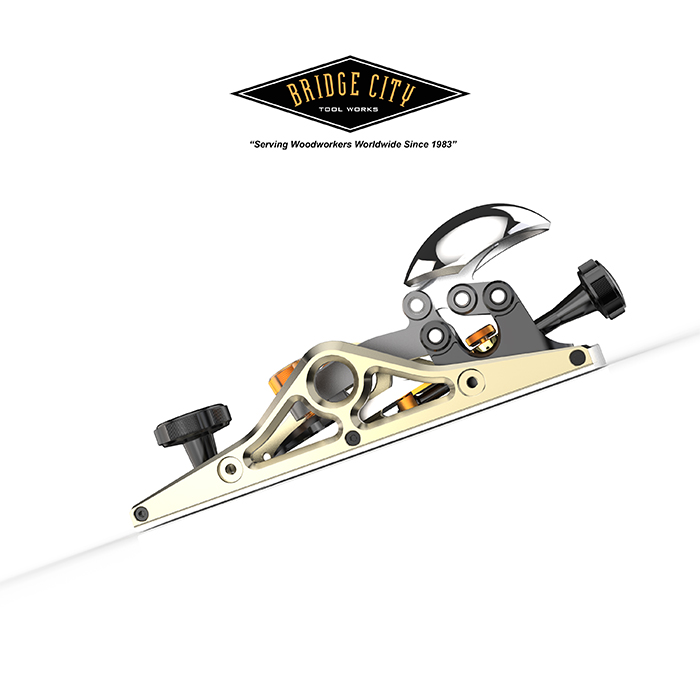 The first iteration of this plane was in 2009 as Commemorative Tool #17. It does not seem possible that this was 10 years ago. I conceived of this radical departure from traditional European styled block planes because I wanted to eliminate the need, space, and cost, of owning both a low angle and regular block plane, both are essential wood shop tools for serious makers.

This new version features a stainless steel sole and aluminum sides that are pinned with precision dowel pins and retained by cap screws. It features an adjustable stainless steel mouth locked by the front tote. It is slightly longer and wider than the previous versions.

The design of the HP-9 blade retention mechanism clamps an A2 tool steel (rc 60-62) iron with dual grinds, at 12 degrees. Now, attack angles of 47 degrees and 42 degrees (for end grain) are possible in a single plane. The image below shows both grinds and the magnetic blade guard that sticks to the unused edge, both in use and during sharpening. We continue our tradition of providing an optical lap (RMS .5 or better) on the bottom of the iron. You have better things to do than spend half a day flattening the back of a new plane iron. In fact, you cannot improve the bottom surface of our irons. 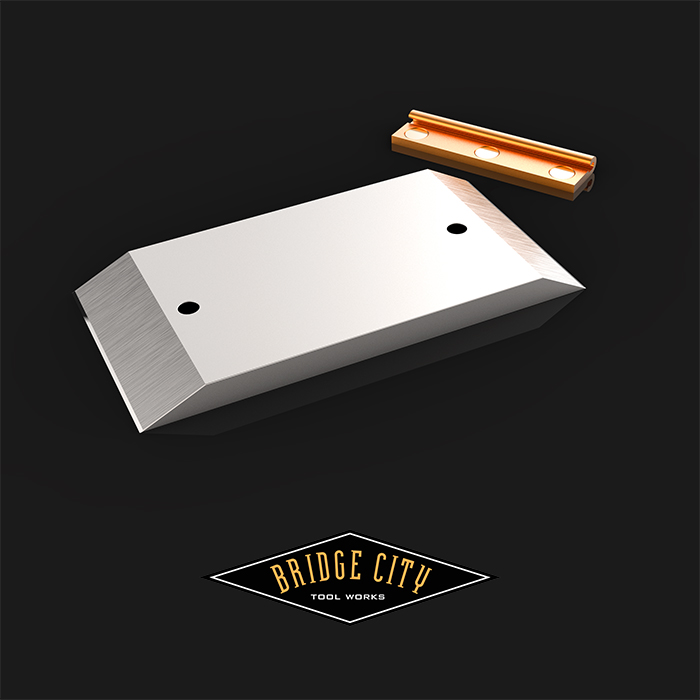 This version, I believe, will be my last (it is at the point right now where I don’t think I can improve it, but if I am wrong, I am sure somebody in the DSN will let me know…). Although it looks similar to the aluminum bodied HP-9 we introduced several years ago, there are numerous improvements that make this version much better.

The first items I addressed involve the lead screw, the anti-backlash mechanism and the index pin retention method. 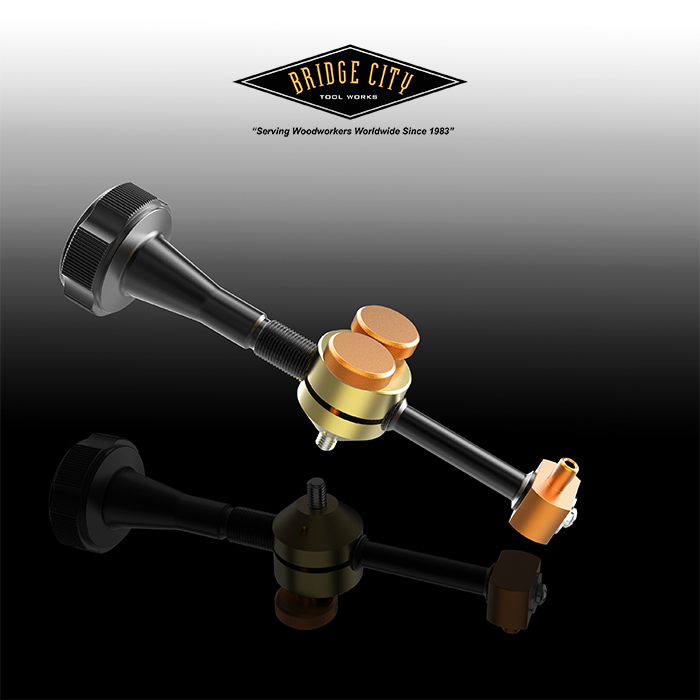 The lead screw now features a 0.5mm pitch which means one full revolution of the adjusting knob changes the depth of cut by 0.1mm (0.003″). The knurled knob features 5 circular cutouts which helps you make incremental, minute adjustments of depth (advance one cutout to the position of an adjacent cutout you have made an approximate “by eye” 0.2 revolution of the lead screw). This increases (or decreases) the depth of cut by approximately 0.02 mm (0.0007″).

The thumb pin that engages with the iron is now retained against the shoulder on the lead screw with a permanent screw. Because bevel-up irons do not require tremendous amounts of clamping pressure, when properly setup, you can adjust the iron depth without adjusting the clamping mechanism. This is just so cool. The lead screw is CNC turned from aircraft aluminum and black anodized. (For those who are not aware of the hardness of an anodized aluminum surface, it is almost as hard as a diamond.)

The split brass adjuster now requires no tools for adjustment to eliminate backlash. In previous versions, a hex key was required and it was a pain in the ass. I am thrilled this is now easily done without tools via the two orange adjusters.

Although the split brass nut will pivot, which helps cant the iron, I can say with all certainty this is a useless feature on this plane. This is a legacy design element from traditional planes where lateral adjustments of the iron were not possible because the iron was not accessible from the sides of the plane body. The HP-9 sides are skeletonized and lateral adjustments are super easy with your fingers. It is fast and accurate making the pivot aspect of the split nut obsolete. Don’t be surprised if this disappears in the production version later this year.

The next change I made was in the iron cap assembly as shown below; 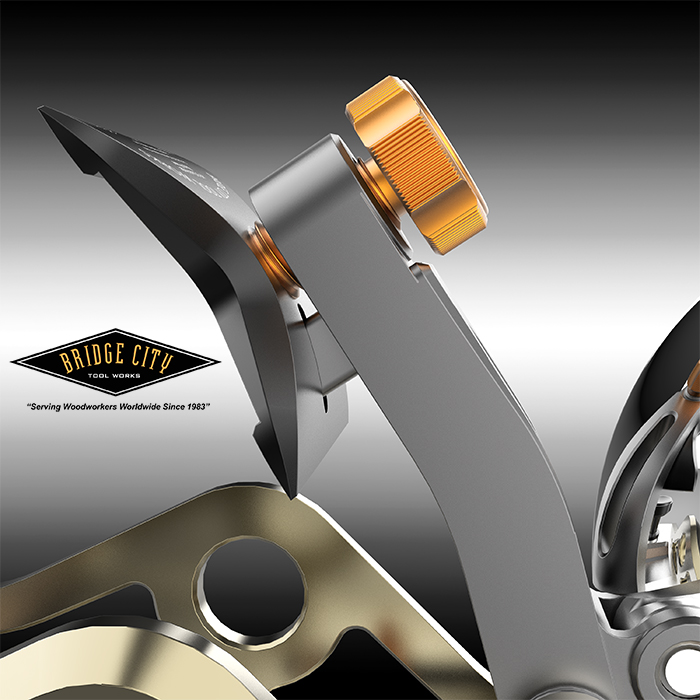 Now the user can adjust the blade clamp pressure without tools with the orange knob.

I also added a tab on the long arm of the linkage assembly to index with the iron cap. This allows the cap to rock heel to toe but is fixed laterally.

Bridge City is the only plane maker today that makes a plane ready to receive depth skids. I cannot over emphasize how dramatically this changes the functionality of a block plane. With depth skids attached, you can turn the plane into a mini-thickness planer and the accuracy is insane. In all of my experiences planing material with this method, the thickness of my stock varied by 0.002″ or less. When all of your material is the same thickness, then joinery becomes so much more enjoyable (and fast). 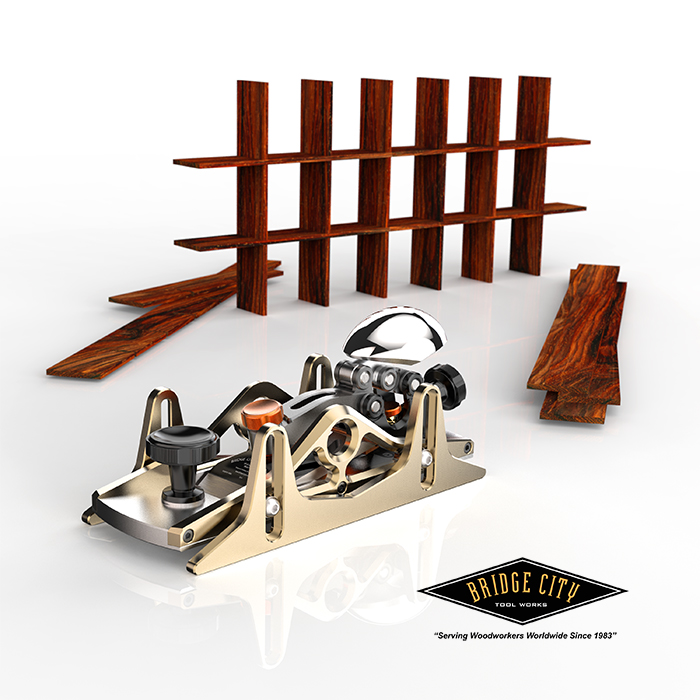 To set the depth skids, you simply place shims under the sole of the plane, drop the skids against a flat surface and lock in place. I purchased an inexpensive set of gage pins so I am not making shims all of the time. For example, if I wanted to plane stock to exactly 0.250 inch, I placed a 0.254″ diameter pin under the front throat, and a 0.255″ diameter pin under the back of the sole. The fact they are not the same doesn’t mean squat. With the iron set to make a 0.002″ shaving, the plane will quit cutting just a hair higher than 0.250″. At this point, I can adjust the iron a little to achieve my intent. This is just an awesome thing to be able to do by hand.

When a square edge is desired with a hand plane, tradition requires that you lay the plane on it’s side and “shoot” the edge. When possible, I prefer using a guide fence as seen below; 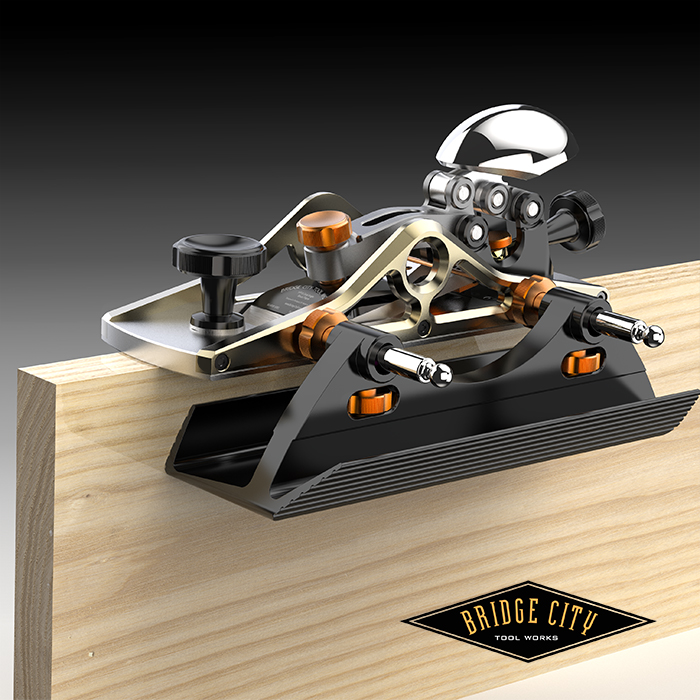 I improved the way the fence posts attach to the sides. The fence posts now thread into the sides and then are jammed with a jam nut which insures they will never come loose in use. If, using this method the edge is not square, this is easily remedied by canting the iron until perfect squareness happens with every pass.

A guide fence has another function that is a big deal to me. They allow folks with disabilities, or inexperience (which is also a disability when you think about it), to achieve accurate results. As we age, we should still be able to have fun in our shops when the obstacles of aging emerge.

The HP-9 Dual Angle Block plane feels fantastic in hands of all sizes, and when the iron is sharp, it cuts as if it is singing. Drive Starved Nation, I did my best on this version and I cannot wait to get one for my shop.

I hope you feel similar sentiment–please feel free to send me your comments. Lastly, price and availability are not known at the moment but I will certainly know more when I return from Nanjing in June.